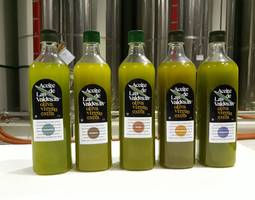 We already have unfiltered olive oil from the new harvest! All varieties available. Try it freshly made!

Which are the properties of the olive oil for the health?

Olive oil has many beneficial health properties. Many of them have been discovered and scientifically tested in the last 60 years. The first discovered properties about the olive oil were connected to their status as fat, the high percentage of oleic acid in its composition, and its beneficial effects on the cardiovascular system.

However, in recent years there have been detected other properties of the olive oil that are not attributable to the fat composition of the olive oil (saponifiable fraction), but for other components in virgin olive oils which provides a great antioxidant capacity, and that prevent or reduce many oxidative processes associated with many physical illness.

Properties of the oil olive against cardiovascular diseases:

The consumption of saturated fat is connected with a high incidence of cardiovascular diseases. Most of the olive oils are composed by monounsaturated and polyunsaturated fats.

This cardioprotective property was the first in being discovered. That was found in the Seven Countries Study by Ancel Keys. Then started the investigations about olive oil as a source of healthy fat in diets.

The incidence of some types of cancer is closely connected to the diet. Several scientific investigations have demonstrated the protective effect of olive oil over intestine and colon cancers, pancreas, endometrium, prostate and breast. The average reduction of incidence observed in people with high consumption of olive oil in their diet varies between 25% and 10% depending on the type of cancer.

Olive oil protection seems to come from the action of the monounsaturated, more stable action against oxidative processes, and antioxidant substances present in Virgin olive oils.

Properties of the oil olive against hypertension:

There is a close relationship between the diet and the blood pressure. It has been shown that regular consumption of olive oil in the diet has a reducing effect not only the maximum pressure (systolic) but also in minimum (diastolic).

These reductions can be attributed to the vasodilator effects of the Mediterranean diet, and, in reference of the olive oil, to the reduction of nitric oxide in the blood flow caused by the presence of the polyphenols in the olive oil.

Properties of the olive oil for diabetes:

It has been shown that diets with rich and habitual consumption of olive oil along with the intake of vegetables, fruits, legumes and cereals improve control of blood glucose and increases sensitivity to the insulin. These effects have been observed both in type I and type II diabetes.

Properties of the oil olive against arthritis:

It was formerly believed that olive oil could help the symptoms of rheumatoid arthritis, but later investigations have not been able to confirm this fact.

However, recently published reports stated that the consumption of Virgin olive oil may reduce the risk of developing rheumatoid arthritis.

Properties and benefits of the olive oil for the digestive system:

Olive oils have several benefits over different parts of the digestive system.

Olive oil reduces gastric motility, and therefore reduces the passage of gastric contents from the stomach to the duodenum. This generates a feeling of fullness, which favors the digestion and absorption of nutrients in the intestine.

It is also known the mild laxative action of the olive oil that reduces the constipation and halitosis.

For all these aspects: satisfying effect, partial absorption of cholesterol in the intestine and its laxative action; and although Virgin olive oil has the same calories as any other fat (9 kilocalories per gram), it is the most recommended fat for those who want to lose weight.

Properties of the olive oil to prevent the aging:

The most widespread biological model to understand the causes of aging is based on processes of oxidation caused by free radicals. The body normally prevents this oxidation with the natural production of antioxidants but the production of these antioxidants decreases gradually.

Virgin olive oils, with their contents in natural antioxidants help to supply the production of antioxidants and reduce the effects of oxidation.

Beneficial properties of the olive oil on the liver, gallbladder and pancreas:

The olive oil acts on the gallbladder ensuring its complete empty and stimulates the synthesis of bile salts in the liver increasing the hepatic secretion of cholesterol. These effects prevent gallstones.

On the other hand, it has been shown that the action of vitamins and antioxidants of virgin olive oil protect the liver cells in patients affected by chronic alcoholism, reducing their oxidative stress.

Beneficial properties of the olive oil for the skin:

The action of the olive oil on the skin is based on the same process that acts on the general aging. As well, with age, occurs the thinning of the dermis and the epidermis, the fibrosis of the collagen and the loss of elastin.

The olive oil contain elements that have served and are used as base components for the development of moisturizing creams, such as the squalene, and vitamin E. The first of them has a molecular structure very similar to the natural elements of the skin that have been already lost, so that the skin is very permeable to it and are absorbed into a large percentage. On the other hand, it has a great antioxidant capacity, which makes it very effective.

We already have unfiltered olive oil from the new harvest! All varieties available. Try it freshly made!